Black and White Thinking: The Danger of Believing that Success is Perfection

It’s common for people to believe that “success” is achieving 100% of their goals on the precise timeline that they deem “fast enough”. The problem with this belief, however, is that it leads to what is known as “black and white thinking”. This term refers to the idea that there are only two options available at any given time, usually one deemed “good” and one deemed “bad”, with no room for nuance.

In terms of weight loss and changing one’s diet, this pattern of black and white thinking is most frequently seen in people who define their days as either “good” or “bad” re: the food that they have consumed that particular day. For these individuals, a “good” day on program is a day in which he or she has followed the program 100% without even the smallest of mistakes. A “bad” day on program is any day that falls short of this 100% mark. 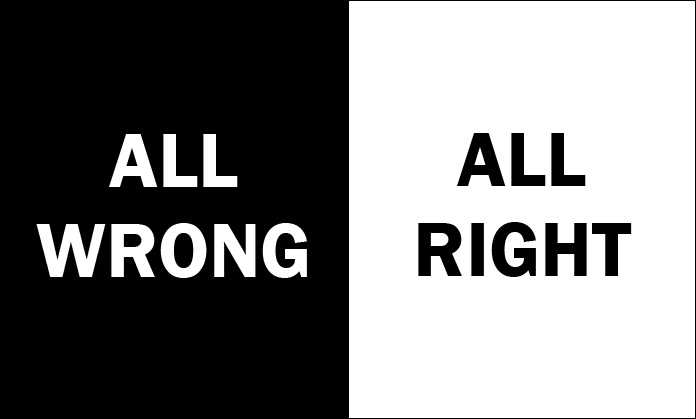 The danger of black and white thinking is that this leads to a mentality where your day is either a total success or a total failure. Not only does this lead to mentally beating yourself up for “failing” during a day on program, regardless of how small the perceived “failure” might have been (e.g. eating your afternoon snack an hour earlier than your meal plan suggests), but it can also lead to a slippery slope of thoughts that tend to play out along the lines of “Well, if I’ve already failed today by mis-timing my snacks, I might as well write the whole day off and eat XYZ [treat food]. After all, it’s already a failed day on program.”

Someone who is prone to black and white thinking is going to have a harder time recovering from any mistake he or she makes while on program, because that mistake is going to be read as a total failure. At it’s most deadly, black and white thinking can cause one small misstep on program to become “Well, this whole day is a lost cause”, which can then quickly spiral into “I messed up all day yesterday—I might as well write off this entire week.”

The best thing you can do for yourself if you find yourself falling into this pattern of thinking is reminding yourself that one small misstep does not define your whole day, or even your whole meal. A mistake is just that: one mistake. Instead of categorizing your whole day as a failure, instead try the following plan of action:

Be kind to yourself, and Happy Holidays from Awaken180° Weightloss.